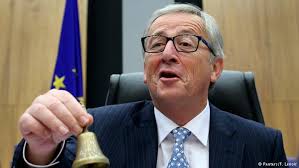 The Remain campaign in the upcoming British referendum on continued E.U. membership must be wishing that allies like Jean-Claude Junker would resist the urge to help.

The President of the E.U. Commission’s idea of assistance is to threaten British voters going to the polls that they will be treated as ‘deserters’ if they decide to leave the E.U.

In his greatest intervention in the referendum contest, the President of the European Commission said that the UK would face “consquences” and be treated as a “third country” following a break with the EU.

Historically threats go down really well in Britain, and are almost certain to activate the deeply embedded cultural oppositional defiance inherent in so much of the national character; especially when they come from the former leader of Luxembourg – a country that barely exists without the E.U. and which the German army didn’t even consider worthy of a stop for lunch in 1940.

The President finished off being helpful to the Remain campaign by suggesting that the package of concessions British Prime Minister David Cameron secured in order to persuade voters to remain in Europe will “not be easy” to deliver.

With Federalist friends like these who needs a counter campaign?

However, the Leave campaign faced a similar issue recently, when French National Front leader Marine Le Pen offered to come to the U.K. to help Nigel Farage persuade people that membership of a federal Europe is not in the national interest, which he politely declined.