(No, the answer isn’t Photoshop. Photoshop is part of the problem.)

Camille Paglia writes at the Hollywood Reporter about Madonna’s “prolonged midlife crisis” that has her insisting on still dressing in outfits that would have been trampy for her in her early 80s heyday and shrilly screeching “misogyny” when men no longer find that sort of thing sexy.

Paglia helpfully suggests that maybe Madonna ought to look to the longevity of stars who have aged a little more gracefully (not to mention doing so without wearing any ass-exposing dresses), a stance for which the deluded feminazis will no doubt consider Paglia a traitor to her sex rather than, say, a sane person with functioning eyes and a sense of dignity.

If aging stars want to be taken seriously, they must find or recover a mature persona. Stop cannibalizing the young! Scrambling to stay relevant, Madonna is addicted to pointless provocations like her juvenile Instagrams or her trashy outfit with strapped-up bare buttocks and duct-taped nipples at the Metropolitan Museum of Art Gala in May. She has forgotten the legacy of her great precursor, Marlene Dietrich, who retained her class and style to the end of her public life.

If you’re wondering what that Met Gala atrocity looked like: 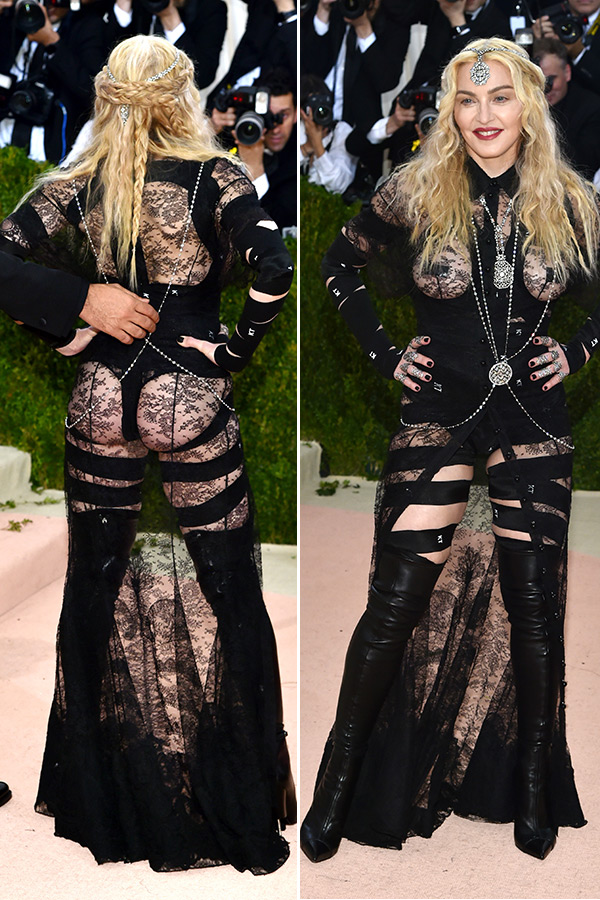 (Before you complain that that photo just made you vomit and/or lose your appetite: We know how tough it is to stick to diet-related New Year’s resolutions, so we’re just doing our part to help you keep yours. You’re welcome.)

As a palette cleanser, here’s Marlene Dietrich in her 60s:

(Plus an interview with Marlene from the same era, in which she’s far saner than Madonna about the whole myth of the sex goddess thing.)

Most disappointing about Madonna’s speech was her collapse into rote male-bashing, which has escalated in Hollywood and surely will increase its cultural isolation from the national audience. The young Madonna was refreshingly sane in her teasing affection for men. Top movie actresses once projected an emotional depth, composure and adult authority that can only be called womanliness. Ingrid Bergman, Susan Hayward, Elizabeth Taylor, Deborah Kerr and Sophia Loren were no victims: They’re strong-willed personalities — onscreen and off. But all of them liked men, and it showed.