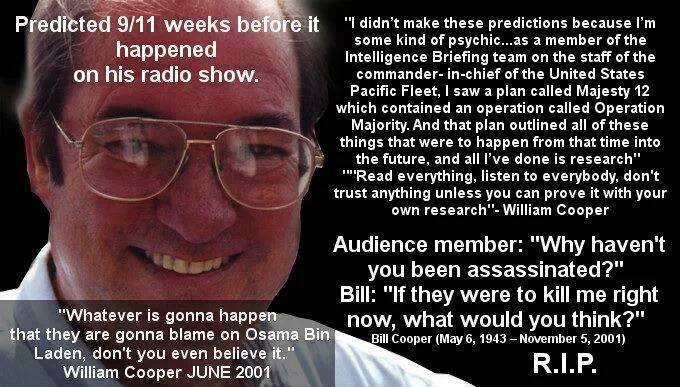 First, in his book ‘Behold A Pale Horse‘ published in 1991, then on his radio program ‘The Hour of the Time‘ broadcast through out the 90’s until his death in 2001 just months before the shocking events of 9/11, an attack on America that he predicted on air, June 28, 2001.

Was he a prophet or just an educated man who saw the writing on the wall?

His belief was that the people have been deliberately taught lies in order to divide and control humanity and he spent his last years trying to warn us.

Among his warnings, was the assertion that a secret society of elites were working towards planetary dominance through war, famine, terrorism, debt, taxation and cultural division, with the aim of creating a single world government.

He described that Islam and the tyranny of Socialism would unite in battle against the west to destroy humanities remaining free people.

In what may be his most shocking and controversial revelation William Cooper describes not only that the Apollo Moon landings were hoaxed but that, (when the time was right) a false Alien invasion of earth would be created to unite the planet under a single army to combat the extra terrestrial threat and would ultimately lead to humanities enslavement.

Does all this sound crazy? Sure it does. That’s why no one would ever believe it but he has the research and military intelligence to form an interesting argument.

William Cooper was an expressed believer in God and taught that the elites who run the world were followers of Lucifer, Prometheus, the bringer of light and forbidden knowledge. The great deceiver who promises his disciples wisdom and wealth.

What would you do for ultimate power and glory? Would you start a war or murder an unborn baby? Would you destroy your town or city for an ideology? Would you demonize a person for believing in hard work and the right to own property? Would you vote for a known psychopath because they said nice things?

If we are not living in crazy days, then, the end times will surely be madness.