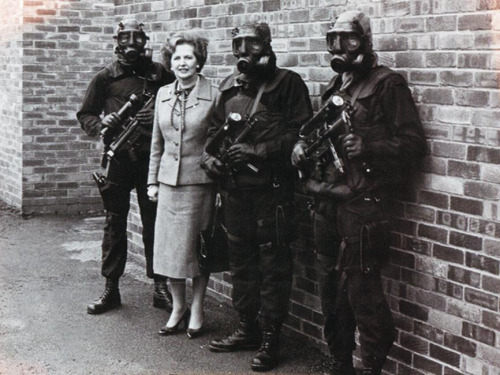 When I was about 11, there was a novel published entitled, The Churchill Commando. It was the late 1970’s, IRA terrorism was at its height and football violence had become engrained within the fabric of society.

When it was released, the Churchill Commando, which centred around the activities of a right wing death squad, was pawed with by the tabloid press as a fantasy panacea to the ills of the day.

The Churchill Commando by Ted Willis

As someone who lived in the U.K. through the full span of The Troubles as they became affectionately known, our current battle with Islamic terror is so much more serious and concerning. Because unlike the Irish nationalists, there is no political solution we can offer these people; nothing will satisfy them short of complete subjugation under an Islamic Caliphate. But also more worringly, Western societies no longer possess the resolve or means by which to defend themselves, never mind defeat such an enemy. Modern politicians and societies have been left ideological demoralized and all but defenceless due to decades of exposure to cultural Marxism.

Cultural Marxism has left us defenceless to Islam

In the 1970’s the British government fought a brutal and messy war against Republican terrorists both in Ireland and on the mainland. It was a protracted clandestine war of terror which included political assassinations; pub bombing; snipers and IED’s.

The British army operated an offensive front in N. Ireland via special forces units and through Unionist organizations such as the Ulster Voulenteer Force (UVF) & Ulster Defence Association (UDA). These units would be fed intelligence on Republican operatives & would be supplemented with army personnel, which would then target and assassinate active IRA members. For a number of years the British government also operate an internment policy, whereby nationalist operatives and activists could be detained on the basis of intelligence alone.

This is the sort of war we will need to fight against domestic Islamic extremism in order to defeat it and erradicate it from our societies. However, things have changed since the 1970’s; our societies are a perfect reflection of the hang-wringing cucked man-bitches they seem determined to produce, and so you have to wonder whether we are capable of winning such a fight?

It turns out that the Manchester Arena suicide bomber attended a radical local moque where his brother was a preacher; his dad was a fundraiser and Al Qaeda affiliate, and the family had just returned from a holiday to the jihadi playground formerly known as Libya. This family, who were first offered a home in Britain as they fled Gaddafi’s regime, not only betrayed every law of hospitality and gratitude, but they all should have been well on the radar of the security services.

Last night’s Islamic terror attack in South London, employed the more crude methods already hallmarked by ISIS operatives – vehicles and knives, but no doubt they will have been nurtured in communities that shared their ideology and received support from others not yet identified.

A recent ICM poll revealled that a staggering 66% of British Muslims would not inform the authorities of a terror plot. Which raises another issue: these bombers do not exist in isolation; statistics show that the communities they come from support them in alarming numbers on a series of issues associated with Islamic radicalization.

66% of British Muslims wouldn’t tell authorities about a terror plot.

Why the ICM poll shows we need to defend our values more than ever.

These operatives, like any other military set up, are merely the business end supported by other extremists who share their ideology of intolerance and subjugation of host societies through violence.

Islam is rotten with violence, from the teachings and example set by the Prophet during his life, to the action of the South London attackers.

So we should not be surprised then these things happen. We have invited in a killer to dine with our family, whilst our politicians lie about the nature and intention of our guest.

At this stage, a political will is required to defend & save our societies.

It’s either targeted hits, internment & deportation, as we saw in Northern Ireland in the 1970’s, or it’s Bosnia 2.0 for our children’s generation.

There is something galling about the prospect of sending your children to war to save the society of people who continue to support Islamic immigration despite all the evidence that it will eventually kill them.

Conversely, Islamists in Britain fail to appreciate how bad this could get for their communities very quickly. At approximately 4% of the population, any civil conflict is certain eradication. They are afforded a sense of immunity and safety by an ideologically imposed culture of seemingly infinate tolerance.

Just under the surface, however, is a tribal culture of brutality and a military wing that perfected paramilitary warfare during the 30 year war against the IRA. They know who they are, and they know where they live. That’s all they need. This is how business is done once you get to this level.

Theresa May now needs to let the dogs off the chain and give these guys a mauling, otherwise nationalist paramilitary warfare awaits.