Over recent months, Zerohedge have been running an increasing number of article dedicated to the overheated Canadian real estate market and the sureal conditions such temperatures have created.

Well, last week the alarm bells started ringing as it was announced that Home Capital Group, Canada’s largest independant mortgage provider, was in trouble and required a bail out of $2 billion. This news resulted in a one day drop in the share value of a staggering 60%, and 71% overall.

Home Capital Group cratered by over 60%, its biggest drop on record, after the company disclosed that it struck an emergency liquidity arrangement for a C$2 billion ($1.5 billion) credit line to counter evaporating deposits at terms that will leave the alternative mortgage lender unable to meet financial targets, and worse, may leave it insolvent in very short notice.

And they weren’t alone… 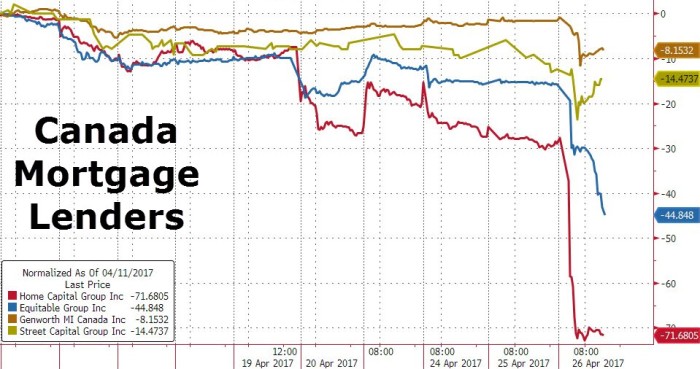 So where did this $2 billion bailout come from? This is where it gets interesting.

One day later, it emerged that the lender behind HCG’s (pre-petition) rescue loan was none other than the Healthcare of Ontario Pension Plan (HOOPP). As Bloomberg reported, the Toronto-based pension plan – which represented more than 321,000 healthcare workers in Ontario – gave the struggling Canadian mortgage lender the loan to shore up liquidity as it faces a run on deposits amid a probe by the provincial securities regulator. Home Capital had also retained RBC Capital Markets and BMO Capital Markets to advise on “strategic options” after it secured the loan.

Why did HOOPP put itself, or rather its constituents in the precarious position of funding what is a very rapidly melting ice cube? The answer to that emerged when we learned that HOOPP President and CEO Jim Keohane also sits on Home Capital’s board and is also a shareholder.

But it got worse for HCG:

On Thursday we observed that as concerns about HCG’s viability mounted, depositors were quietly pulling their funding from from savings accounts at subsidiary Home Trust. By Wednesday, when Home Capital revealed it was seeking a $2-billion loan to backstop its sinking savings deposits, shareholders ran for the exits, driving down the company’s share price by 65 per cent on Wednesday alone, and heightening the sense of panic.

On Friday, the company revealed that high-interest savings account balances fell another 36% to $521-million by Friday morning, down by a whopping $293 million from $814-million Thursday and more than $2-billion a month ago.

Considering the lack of reporting on any of this in the MSM, you’d be forgiven for thinking that this was all taking place in an alternate dimension.

But don’t expect CBC or CTV to share this news with you any time soon; they will keep this boat afloat and the illusion of stability going as long as they can.

But there is another concerning aspect to this story: Canadian household debt

A whopping 31% of respondents said they already don’t make enough to meet all their financial obligations.

Half Of Canadians Have $200 Or Less In Savings 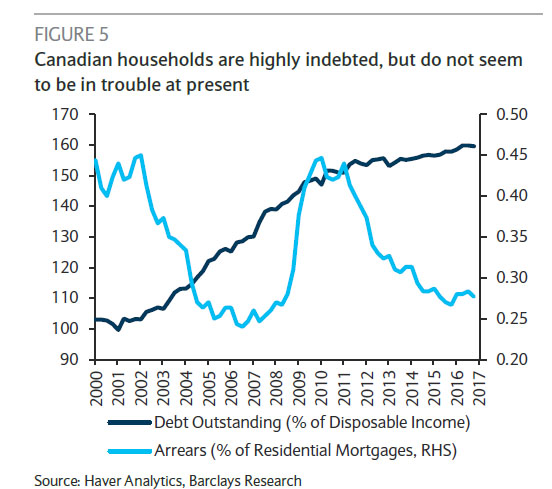 It would appear that in order to afford their increasingly expensive standard of living, Canadians have been forced to take on an unprecedented level of debt, with little understanding of how it really works.

Roughly 60 per cent of respondants said they don’t have a firm grasp of how interest rates affect debt repayments.

A decision by the BoC to start lifting its key policy rate from historic lows would raise the cost of carrying debt across the country. A one percentage point rise in the BoC’s key interest rate would likely push up variable mortgage rates by a similar amount. A variable mortgage rate that’s currently set at 3 per cent, for example, would go up to 4 per cent, which represents a 33 per cent increase in interest payments for the mortgage holder. That’s an extra $83 a month for every $100,000 in outstanding mortgage debt.

It would appear that many Canadaians are so highly leveraged, that even a modest hike in interest rates would shake many of those hands from the tree. And this combination of household debt and an overheated housing market leaves the Canadian economy on the verge of a housing and debt crisis, the likes of which we last saw south of the border in 2008.

May 11:  Moody’s downgrades Canadian banks: Beginning of the end for the housing market?