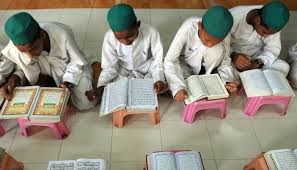 The Ofsted chief inspector of schools in Britain, Sir Michael Wilshaw has warned that thousands of children are in danger of being radicalised as they remain hidden from authorities in unregistered schools across Britain.

Hold on a minute. Are you telling us that in modern Britain there are unregistered schools that do not meet national standards or inspection? Apparently.

Where are these schools?

Last month, inspectors issued seven warning notices to suspected illegal schools in London, Birmingham, Luton, Wolverhampton and Stoke-on-Trent, where they found around 350 children on the premises…

Inspectors have identified 100 suspected unregistered schools across the country since a team was set up in January to investigate the problem.

January? They’ve only been looking since January and already they’ve discovered 100 unregistered schools; that’s 20-25 per month!

The article in the Telegraph does not mention if any group in particular is responsible for dragging parts of modern Britain into the tribal lands of Pakistan, but obviously if ‘radicalisation’ is a major concern, and the list includes London, Birmingham, Luton & Wolverhampton, you have to be ideologically impaired not to work it out.

Needless to say, this is a small price to pay for living the progressive dream of Multiculturalism. The fact that a minority with a significant & violent extremist element are operating an educational system outside of the national curriculum or scrutiny, should only be of issue to racists.

Everyone else should just relax. This has never gone wrong in the past.