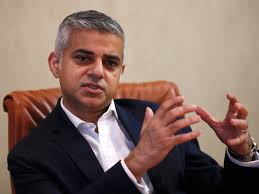 This week, newly elected Mayor of London, Sadiq Khan addressed Donald Trump’s proposed ban on Islamic immigration. It should have gone something like this:

Khan: ‘Let us into your country.’

Trump: ‘I’d rather not. Some of you people are violent extremists who seek our destruction.’

Khan: ‘You better let us in. If you don’t, some of our people may become violent and seek your destruction.’

Instead, Trump offered to make an exception in the case of Khan.

And if Khan’s self incriminating logic and affiliation with Islamic extremists wasn’t enough, he then went on to put himself firmly in the camp of the ‘enemies of humanity’ by promising to help Hillary Clinton get elected as President of the United States. Read More

We won’t even bother addressing his ideologically inconsistent and naive comments about being a Muslim and a feminist, as we’ve already covered that fallacy in a previous article.

One thought on “The Wrath of Khan”