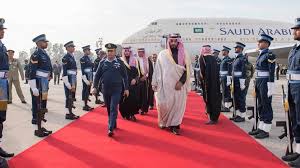 As suspected for some time, and thoroughly detailed in Crossing the Rubicon by ex-police officer and investigative journalist, Michael C. Ruppert before his death, there were two main players behind the 9/11 attacks – the Deep State (elements within the U.S. government including corporate; financial interests & CIA) and axis of Islamic evil & exporter of Wahabbist ideology, Saudi Arabia.

Given the depth & detail of Ruppert’s 528 page publication, it seems incredible that we are still searching for the answers to the mysteries of 9/11, but hey, who can be bothered reading 528 pages of detailed investigation nowadays? We can thank social media for that.

Now it would see that not all is well in the House of Saud & Deep State bed chamber, as it has emerged that the Saudis have threatened to dump $750 billion of U.S. treasuries if congress amends a bill allowing the pursuit of foreign nations responsible for terror attacks that kill Americans on U.S. soil, which they fear could implicate Saudi state involvement in the attacks which killed over 3000 people.

Under the current US law, foreign nations have a degree of immunity from being sued in American courts. The Foreign Sovereign Immunities Act of 1976 is one of the reasons why families of the September 11, 2001 terrorist attacks largely failed to bring to court the Saudi royal family and charities over suspicion of financially supporting the attacks.

The bill introduced in the Senate would waiver the immunity for cases involving terrorist attacks that kill US citizens on US soil.

Possible links between the perpetrators of the attack and Saudi Arabia may be hiding in 28 classified pages of the 2002 congressional report on 9/11, which allegedly describe how Saudi Arabian nationals with links to the government financially assisted the 19 hijackers who flew airplanes into World Trade Center and the Pentagon. Many people, including the co-author of the redacted pages, former Florida Senator Bob Graham, have been campaigning for years to make them public.