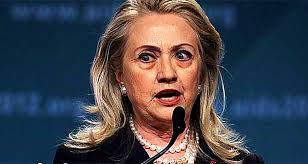 Over the weekend, the Huffington Post published an article claiming that Hillary Clinton will be charged by the FBI with racketeering, then promptly removed the article. This from ZeroHedge:

The Racketeer Influenced and Corrupt Organizations Act (RICO) is a United States Federal Law passed in 1970 that was designed to provide a tool for law enforcement agencies to fight organized crime. RICO allows prosecution and punishment for alleged racketeering activity that has been executed as part of an ongoing criminal enterprise.

James Comey and The FBI will present a recommendation to Loretta Lynch, Attorney General of the Department of Justice, that includes a cogent argument that the Clinton Foundation is an ongoing criminal enterprise engaged in money laundering and soliciting bribes in exchange for political, policy and legislative favors to individuals, corporations and even governments both foreign and domestic.

All we can say is Please Santa, we will never ask for anything ever again.