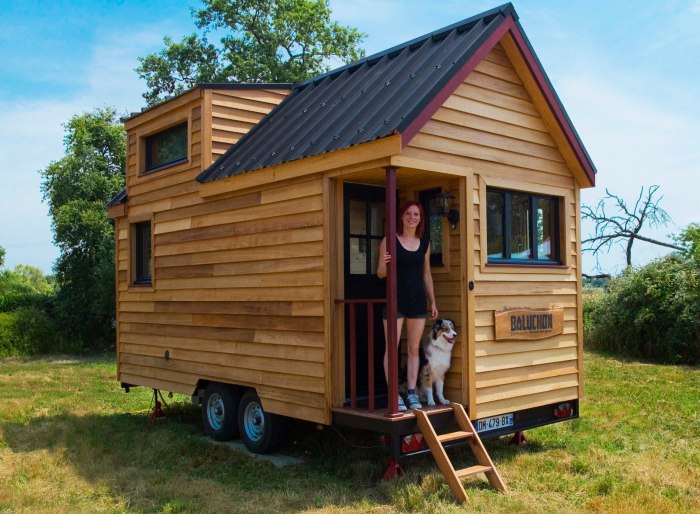 The Globe and Mail’s Erin Anderssen on the whole “tiny home” movement and how quickly its proponents tend to move on up to larger homes again… which I don’t seem to have seen covered in the HGTV tiny home propaganda:

Remember that couple featured in the documentary Tiny, which depicted their tiny home’s construction and extolled the minimalist lifestyle? They parked the end result in a field in Colorado and never lived in it together full-time. (In a blog, they explained that they left this out of the movie “so as not to spoil the experience of seeing that story unfold on screen.”) You may also recall Carrie and Shane Caverly, who were featured on TV shows and in newspaper articles for “bonding” in their tiny home? They lasted 18 months before they decided it was “too small” and moved into an apartment. Many more owners rent out their tiny homes or use them only as weekend getaways, and it’s not easy to find a tiny-home builder actually dwelling full-time in the product they’re selling, at least in Canada.

Gee, next they’ll be telling us the world won’t come to an end if you don’t get the stainless steel appliances and granite countertops…

After all, it’s one thing to live by choice in a chic shack in a pastoral setting or a warm climate. It’s quite another to be forced into a micro-room without a view because that’s all you can afford. What might work short-term for a hip millennial in New York, or a homeless person in California, is not necessarily the answer for a single mom.

Psst… there’s also the psychological prison cell factor. Some of those tiny homes aren’t much bigger than the cells that human rights groups declare inhumane when murderers have to live in them. Why would you subject yourself to conditions Amnesty International objects to criminals being subjected to?

And Anderssen is right: it’s all about choice. It’s one thing for a vacation where you’re only in the structure to sleep and otherwise you’re playing in the great outdoors. However, some municipalities are using the fad to consider new zoning and city planning schemes. Setting up conditions to force people into the human equivalent of battery cages is not going to end well. We spent the last century getting away from the overcrowded tenements of the slums of the Industrial Revolution and now the tastemakers are trying to con us right back into them in the name of fashion and carbon footprints, a point made by Dal Kopec later in the piece:

“We are getting a lot of idealism, and a lot of people promoting this perfect image without having the longevity to endure it,” says Dak Kopec, the director of design for human health at Boston Architectural College. “We are not being pro-active, to see what we have learned already from history.” The lesson: Fad housing often crumbles into slum-living for the poorest families. When was the last time a trailer park was a coveted address?