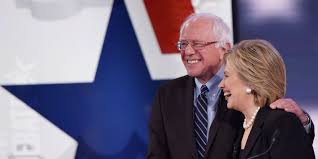 After endorsing reptilian shapeshifter Hillary Clinton, Bernie Sanders has decided that lizard cock don’t last that bad after all – kinda like chicken really.

That just leaves Bernie’s supporters with a nasty taste in their mouths, as they realize that deep down, Bernie is a Deep State bitch for the Clinton crime dynasty and Warfare State.

“Hillary Clinton understands that we must fix an economy in America that is rigged and that sends almost all new wealth and income to the top one percent… Hillary Clinton will make an outstanding president and I am proud to stand with her here today.”  Read Full Text

You have to wonder whether Bernie is talking about the same Hillary Clinton, and whilst Hillary must have thought this would provide her with access to Bernie’s supporters,  the total and immediate collapse of Bernie’s integrity (the only thing he had), has actually provided succor to Republican candidate, Donald Trump’s campaign, who wasted no time in declaring that “Bernie is now officially part of a rigged system.”