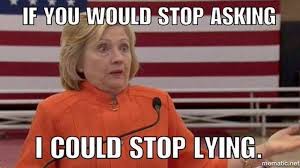 … But fails to mention that she ran the operation to supply them with weapons.

Hillary Clinton accused Donald Trump of becoming Isil’s “best recruiter” during Saturday’s Democratic presidential debate in a fierce condemnation of the Republican front-runner’s call to ban all Muslims from entering the US.

“They are going to people showing videos of Donald Trump insulting Islam and Muslims in order to recruit more radical jihadists,” she said. “So I want to explain why this is not in America’s interest to react with this kind of fear and respond to this sort of bigotry.”