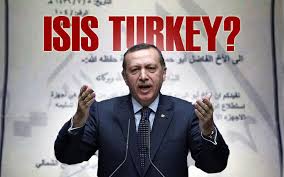 Russia’s defense ministry said on Wednesday it had proof that Turkish President Tayyip Erdogan and his family were benefiting from the illegal smuggling of oil from Islamic State-held territory in Syria and Iraq.

Moscow and Ankara have been locked in a war of words since last week when a Turkish air force jet shot down a Russian warplane near the Syrian-Turkish border, the most serious incident between Russia and a NATO state in half a century.